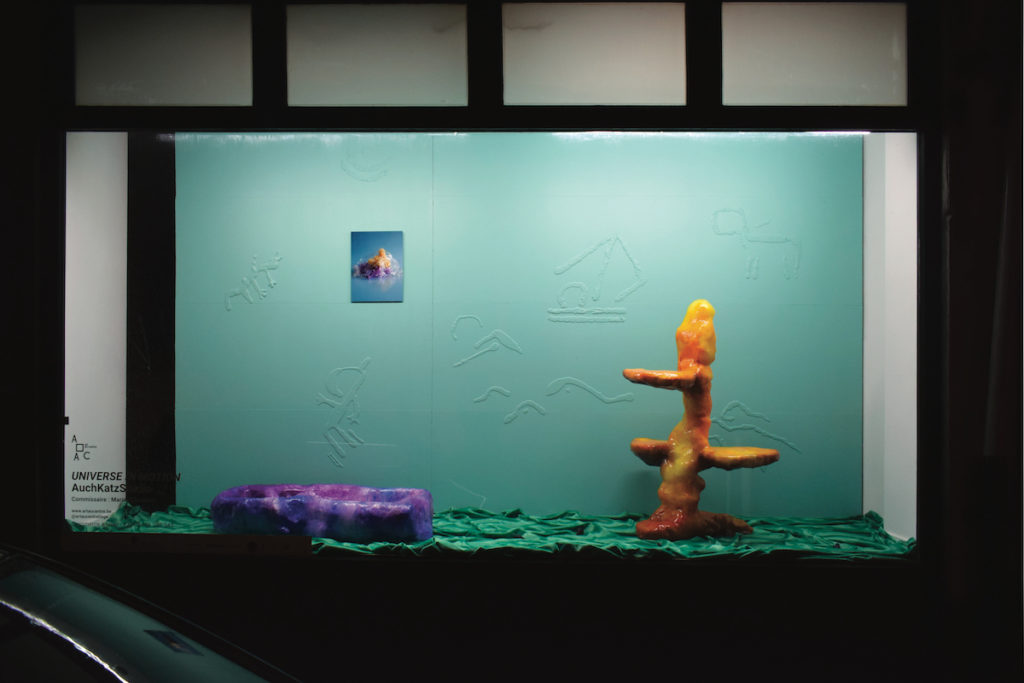 AuchKatzStudio is an artistic duo composed by Elsa Belbacha-Lardy, graduate of the Villa Arson in 2019, and by Thomas Thibout, graduate in space design of the ENSBA Lyon.

Together they created AuchKatzStudio in 2017. This results in the merger between two practices, sometimes sculptural design and sometimes functional art.

This encounter : it’s the merger between our two universes. Elsa’s paintings are solidified while simultaneously Thomas’ sculptures turn to liquid. We create items that are at the boundary between art and design and that get linked together by the material and the painting. Like this we invite the spectator to become immersed actors in our pictorial spaces. While color physically deploys into the space it sculpts, sitting on what could be contemplated as the sculpture or the painting of a rock, the spectator is snatched into a slowly moving space-cave, both inert and lively and that suggests an encounter between two temporalities, ours and the temporality of the mineral and organic world. While freeing ourselves from the boundaries of the canvas and then the space, our approach thus asserts itself in a duo by combining painting and color towards the organic object : sometimes sculptural design and sometimes functional art. We consequently consider our spaces as being sometimes an experimental laboratory in which liquid paintings develop chance and reveal our separation with the material in our work process, and sometimes as a cave inspired by a post-apocalyptic science fiction universe in which a space appears, allegory of a future world that forces humans to face their responsibilities and invite them to reflect on the servitude to which they could well be linked.