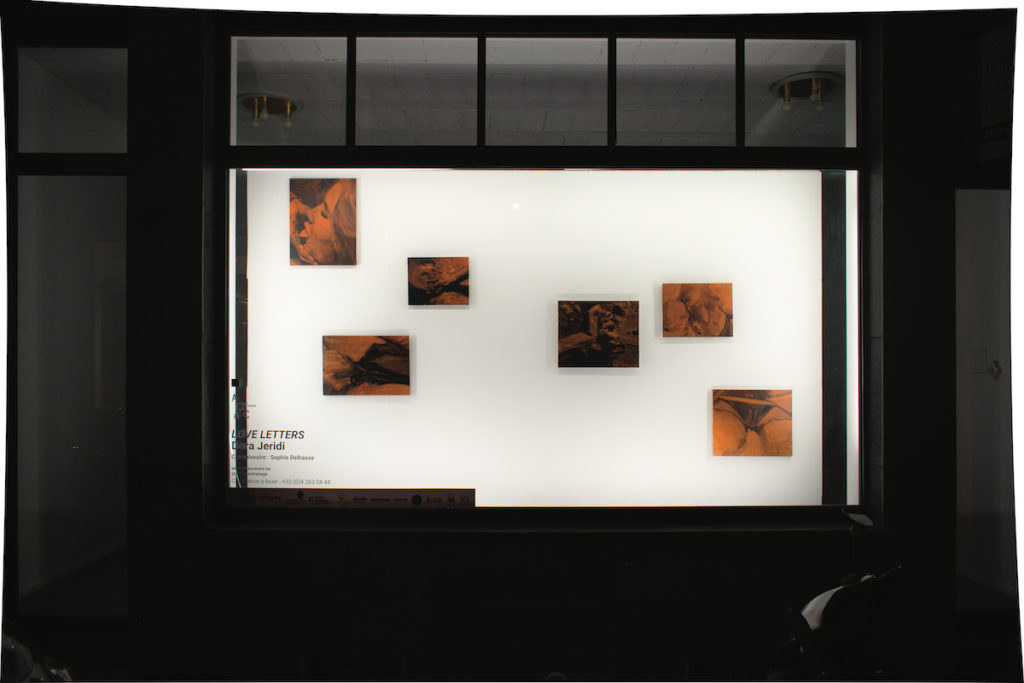 Love Letters is the title of the collection of paintings created by Dora Jeridi in 2018. A constellation of picture framed scenes whose unity is performed in a minimal and dark palette that multiplies the motif of the body, the nudity and the desire. A fragmented self-portrait that suggests as much as it shows, at the volatile boundary between figuration and abstraction. The artist’s painting reveals a gestural and urging quickness, transforming in certain canvas the figure itself. She transforms it and gives it a psychological carnal thickness, a texture. Created in the intimacy of a romantic/erotic exchange on Messenger, unlike the instantaneousness of the messages, Dora Jeridi shifts the painting into the sphere of fantasy and confers as much evocative power to the represented scenes as the off-screens that will remain inaccessible.

The sensual and intimate beat that emerges from the collection places the artwork into the sensitive world, presenting « the body of the artist as it is in reality : incarnate, desiring, in turns potentially submissive and dominant, unstable »*. The artwork foils the stereotype of the passive sexualization of the female body or the muse revealing « the possibility for nude to be a powerful and active figure »**. Is it an act of emancipation or violation in a society where a presumed sexual liberation seems to have led us to a market of disembodied pleasure ? Dora Jeridi’s collection Love Letters reveals the poetic power of desire and its carnal embodiment.