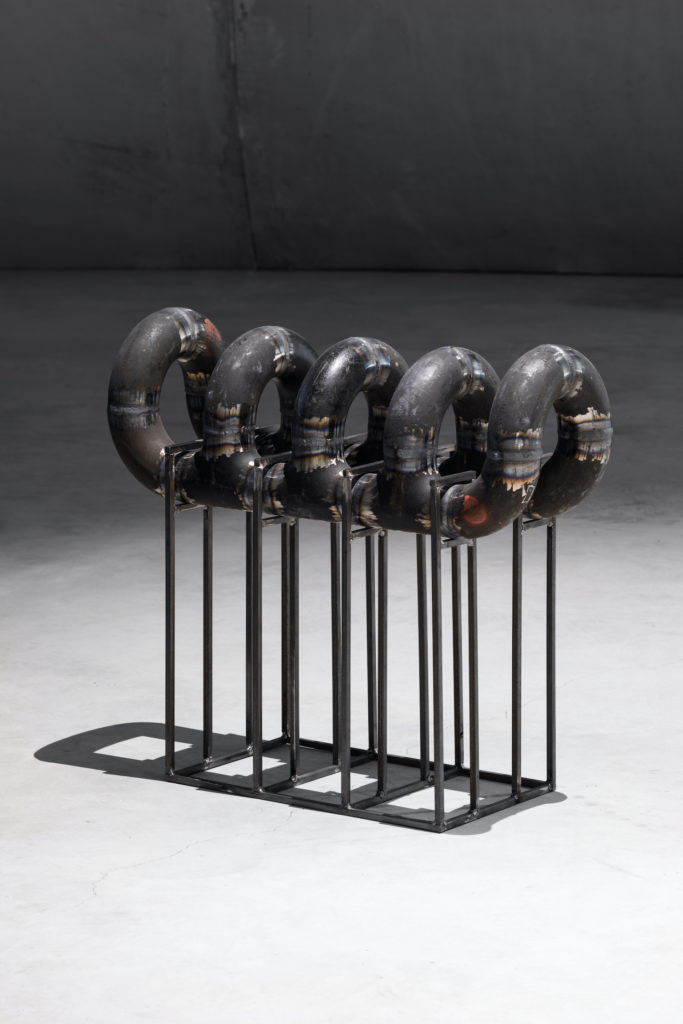 Donovan Le Coadou is fascinated by “oversize loads”, a special transport whose imposing and massive dimensions require the implementation of regulated and often impressive safety measures. Wind turbine blades, ship hulls and tractor shovels are all potential sculptures of which the semi-trailer becomes the moving base. In the work of the artist, the sculpture is therefore in motion, not by a kinetic mechanism activated by a force, but thanks to the displacement of its pedestal. We directly think of Michael Heizer and his displacement of a rock for 11 days[1]; but unlike actions on natural elements, Donovan Le Coadou focuses on industrial or manufactured objects.

This idea of ​​transporting sculpture is obvious with Mirabel, a replica of an airplane propeller (more precisely of a “Flying Flea”) made in wood by hand, whose initial plan is based on the book from the 1930s entitled How I built my Avionnette by designer Henri Mignet. Donovan Le Coadou’s sculpture-propeller then traveled alone in the hold of a plane between Montreal and Rennes in 2011. A nod to Brancusi, for the case of the bird flying through space in which the artist sued the American customs to have one of his sculptures recognized as an artwork[2].

Also in 2011, during the construction of the Brest tramway, Donovan Le Coadou assembled a 3m high wooden Trojan horse, placed and sealed in front of the forecourt of the town hall, without any authorization. A few days later, during a festive evening for the announcement of the baccalaureate results, tipsy young people bring down the installation. Various unlikely situations ensued – the town hall thinking that it was an official project of the city – so that the sculpture was finally saved and repatriated (via special transport of course) to Brittany in a garden.

These different actions are so many pretexts for spontaneous gatherings, exchanges on a given territory. Witnesses and local residents of such operations are often curious and share anecdotes. Like this one time when Donovan Le Coadou repainted in its original ash green color an old Renault Dauphine abandoned in Dampierre-Sur-Loire. Passers-by told him that this wreck was once a meeting place for local young people, aptly renamed “Place Dauphine”.

This interest in bodywork dates back to the artist’s adolescence, in Plougrescant, where young Donovan was having fun in a field that looked like a car junkyard. On an 800 square meter surface, his father, gifted in mechanics and repairs, has been piling up for years dozens of carcasses of cars, tractors or boats to fiddle and provide different services to the neighbors. The guy has his little local reputation. As a Fine Arts student, Donovan Le Coadou will not fail to draw heavily on this Mad Max universe a few years later. He then produced the beginning of his Samples series, still in progress, by cutting out pieces of doors with an angle grinder and then taking a snapshot. These samples would continue, especially on the island of Ouessant (where the car fleet remains underdeveloped), up to an army truck abandoned on a road in Georgia.

Donovan Le Coadou pays a lot of attention to empirical construction and solo DIY. Through movement, his sculptures take to the road and join a whole imagination of freedom and landscape construction.

Romain Semeteys 2018, text written as part of the research SET UP project, initiated and coproduced by Réseau DDA and C-E-A.