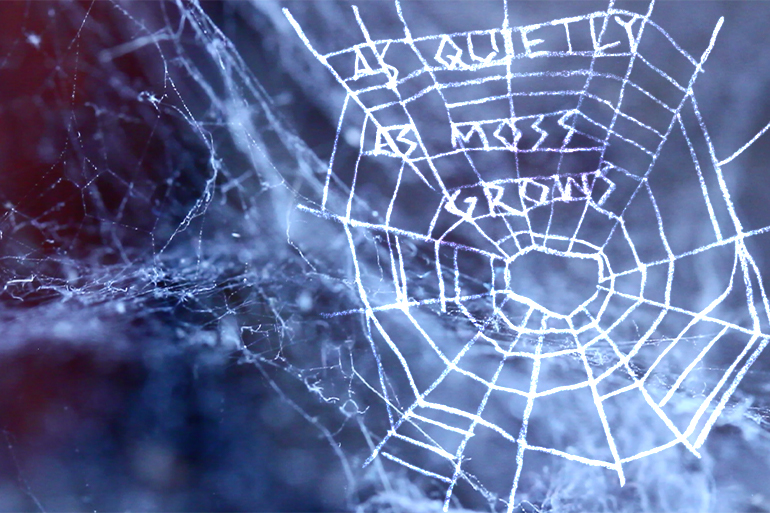 AS QUIETLY AS MOSS GROWS

“She had noticed that in recent days the spiderwebs had been growing larger and denser, seeming to completely take over the abandoned shops and offices. She heard a noise, a crunch of a leaf behind her, and quickly darted around, startled. As she did so her torch briefly flashed into a nearby window, illuminating the thin, silky lines of a spiderweb. She turned back, shining the light carefully across the lines from left to right, as if reading a book. And within the path of light she deciphered the words ‘as quietly as moss grows’ spelled out with spidery precision.”

‘As quietly as moss grows’ casts a fictional moment from a story into the material world. This installation is one component of a multiform research project about tardigrades who live on the moon. The project centres around a fairytale, ‘In the beginning…’, written in response to a curious 2019 incident when a spacecraft crashed-landed on the moon. On this spacecraft was a microscopic archive of human history, alongside a colony of tardigrades: hardy, tiny creatures known to survive space. Within the fairytale reimagining, these tardigrades are joined on the moon by their favourite habitat – mosses. The spacecraft crash releases the moon’s biggest secret: a spring of lunar water. In this magical, moist land the mosses and tardigrades quickly and quietly spread across the moon until moonlight is lost on Earth, and one giant, moon-sized tardigrade materialises as a second moon.

In the chaos that ensues on an Earth without moonlight, humans realise they are resident on a planet where they are no longer in charge. They begin to take notice of the small and unnoticeable. They learn to read messages in spiderwebs blanketing the capitalist ruins of a past world.